Bright Line Eating® is transforming lives. Getting into a Bright Body is only the beginning. Those who commit to the Bright Line Eating lifestyle also benefit from loads of achievements that include everything from greater happiness to balancing health metrics.** 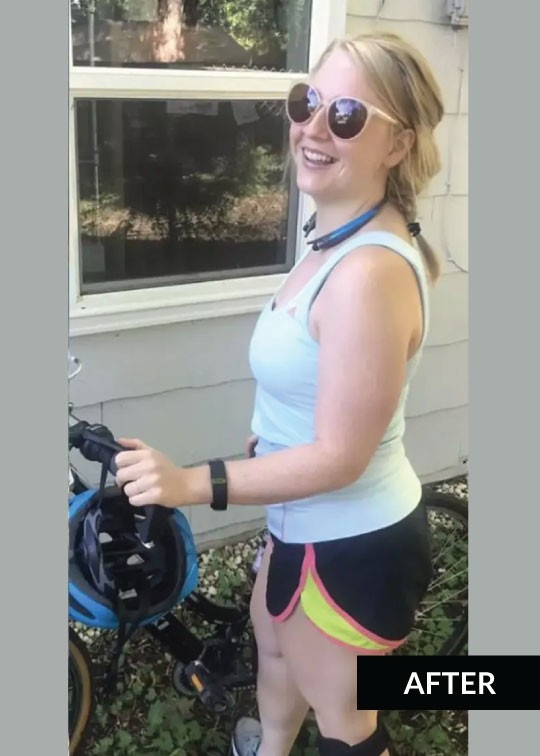 Kirsten started Bright Line Eating in October of 2017. When she listened to Susan talk about the program, she was enthralled by the science. Then Susan said the plan included no sugar and no flour. She thought, “Nope! I can’t do that.” But everything Susan said stayed with Kirsten, including how one of the ways BLE is different is that it gets easier over time. Kirsten bought the book and read it in two days. She had tears in her eyes feeling like Susan was talking directly to her. She immediately started with the 14-Day Challenge. A year later, Kirsten realized she needed some more support to get to her Bright Body and joined the Boot Camp. She has now been on maintenance for over a year! Kirsten is so grateful for the incredible, deep connections she has made in this loving community. She has been held and supported during her highs and lows. The weight loss was amazing, but the other benefits are why BLE has been life-changing for her. When she follows the plan, she has such peace around food that she’s able to be more present in life. One of the reasons Kirsten has been successful in her journey is because she took to heart that she isn’t called to be perfect—she’s called to be unstoppaBLE!

*People following the Bright Line Eating program lose an average of 1-2 pounds per week. Featured participants expended more time and effort than required and were asked to share their experiences to help promote the program because of the extraordinary results they achieved.

Fill out the form below to gain access to The Science of Sustainable Weight Loss Series featuring Bright Line Eating's Founder & CEO, Susan Peirce Thompson, PhD. Learn the science behind the BLE movement.